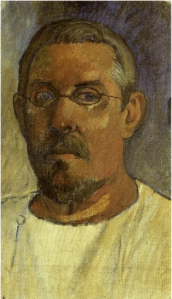 Gauguin is not in my personal pantheon, perhaps because of the man he was (execrable) as much as for the excessive symbolism in his painting. However his retrospective at the Tate Modern in London (ends January 16) is quite comprehensive (though his period from Arles is curiously missing), and revelatory. The exhibition is subtitled ‘Maker of Myths,’ which in my opinion is only a minor aspect of his work. One of the first works in the show is this self portrait from 1903, the year of his death: far from the colorful flashes of his Polynesian paintings, it is of an astonishing sobriety. With his white, collarless shirt, grisly grey hair, and small, severe glasses, one seems to be looking at a clergyman or a Zen monk; the bright patch of light on his neck a scimitar, a mark of mortality. The painter looks calm, sure of himself, serene (hardly the case, if one believes his biography); this work promises an alternative reading of his life and work. One feels the breath of the black death (I thought of one of Bonnard’s last self-portraits, similarly serious and prescient).

Further on, this painting of Pouldu (painted in Paris) from 1890, ‘Loss of Virginity,’ rarely lent by the Chrysler Museum in Norfolk, is a riot of violent color, floods rising in horizontal bands: brown earth, white body, blue grass, pink hill, green prairie, the somber blue sea, the clear blue of the sky, relentlessly descending to disturb the grey-green rocks, the lost flower/bird of virginity on the woman’s thigh, the perfidious fox close to her neck (the emblem of deflowering, and of Gauguin no doubt), 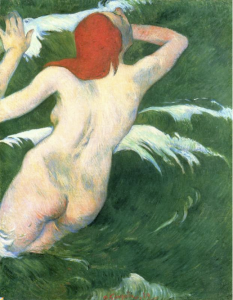 but also the haystacks, the procession of Bretons, the waves. Certainly, the symbolism is a bit heavy—the virginal flower, the fox-sex, the procession of redemption—but the colorful composition is so vibrant, so garish, that one is spellbound. The young model is Juliette Huet, a seamstress, Gauguin’s mistress whom he will abandon, pregnant, for Tahiti. ‘L’Ondine’ (1889) also features her, a symbolist painting whose vibrant color announces the Fauves. 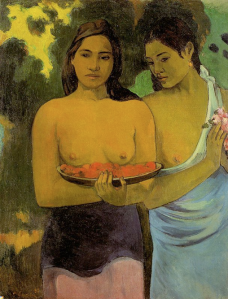 The exhibition being organized thematically (sometimes speciously), it is the bizarrely named room ‘Gauguin’s Titles’ that houses his most beautiful Polynesian nudes; perhaps they were all mistresses of this faun, perhaps he got each one knocked up, perhaps he gave them all syphilis—but what splendor! Along the walls one finds the reclining nude of ‘Nevermore’ (1987), the image of tragic luxury itself, dreamlike beauty whose dark complexion is lit by the yellow spot of the pillow, whose feigned innocence is contradicted by the Poe-like raven; the twins in ‘Quoi, tu es jalouse?’ (1892) with their mingled bodies, overturned, indivisible, one sitting classically, the other as a wild maenad, and the dark, menacing shadows on the left, seemingly an echo; then, seated, ‘Boudeuse’(1893), melancholy, heavy, rooted, within a triangle made by the yellow hat, the blueish brazier,  and the ominous black dog. Finally, at the end of this progression from horizontal to vertical, the standing nude in ‘Où vas-tu?’ (1983) holds a green gourd almost as another breast, defying us with her glance. To complete the pleasure, I would have loved the fifth canvas not to be ‘Les ancêtres de Tehamana,’ one of his companions, dressed in missionary white and blue, very wise in front of the Easter Island statues and Rapanui signs, but rather the Metropolitan Museum’s ‘Les deux Tahitiennes’ (1899), both facing straight-on, bare chests offered on a bed of hibiscus flowers, underlining one, revealing the other. All these pictures are from Tahiti, and it seemed to me that the Marquises works were missing this hunger and force; his sculptures dominate the rest of the show, and among others, his House of Joy, a whole program. But it is through this self portrait of 1903 that everything concludes, however, inevitably.

This entry was posted in UK. Bookmark the permalink.