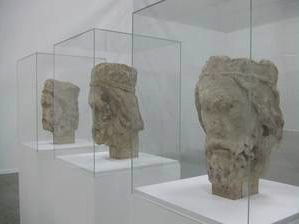 Adam McEwan’s carte blanche at the Palais de Tokyo (until January 16th), is one of the most bracing exhibitions in a long time at the Palais, which too often complacently purrs and self-censors. This time, the artist (whom I hardly knew) collected a group of inspiring works to compose a show punctuated with key words (from genealogy to consecration, then to Dance Macabre, and pilgrimage, to finish with mescaline and cemeteries) that are stimulating but not too heavy handed. In the entrance, the heads of three Kings of Juda, decapitated at Notre Dame in 1793 (and not 1789) and found in a wall in 1977: ghosts of the past, apparitions of buried memories, traces of revolutionary vandals and the weight of history. These works sets the tone, not towards a prescribed point, but towards a sensibility. One might be left cold by the mercantile accumulation of crates and the green carpet of Michael Landy, but an almost funerary room (Dance Macabre, necrology, demise, idleness) cannot be ignored: Gino de Dominicis tries to fly by sheer will, Ana Mendieta gets indecent with a skeleton, and an unknown, rundown, Flemish Geert Goiris shows the disaster of a ruin, the house seeming to tumble into the water.

At the back, Bruce Nauman, with Frank Owen, shows some 15 runners (one of which of Nauman himself, in a Hassidic beard and Ray Bans) on a conveyor belt: the bodies jump, their arms move like pistons, mechanical breaths become breathless until finally exhausted; the camera alternates between close-ups of the rustling clothing, sweaty skin, and grimacing mouths. The race is absurd, without end, forever in place, in vain, a sort of dance macabre. The work was initially called ‘Pursuit (Truth),’ then ‘truth’ disappeared; it is no more than a race without end, without name. 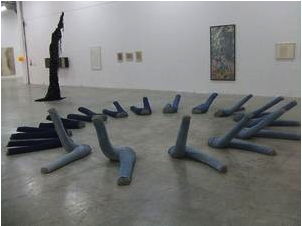 Next, one moves through a suspended labyrinth where nothing is ever lost (by Georg Harold, who spent time in prison in East Germany for trying to get West), a light and transparent anti-prison. Then, the viewer can dump his past and unwanted memories into Martin Kippenberger’s rubberized dumpster (‘Memorial of the Good Old Times’). Rob Pruitt has a cirlce of legs in the air, detached from torsos or feet, wearing jeans that fade along the spiral of limbs—a bubbly, happy piece (‘Esprit de Corps’). 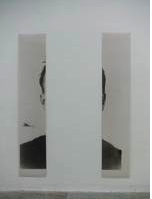 Roman Signer shows a model helicopter disaster (‘Helikopter auf Brett’), Michelangelo Pistoletto presents a portrait of Jasper Johns showing only his ears: between the two, a void, an emptiness to jump into, to fill with imagination, a flight of the artist faced with the question of identity. 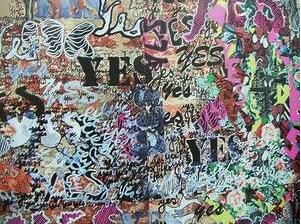 As a final flourish to these notes of hollow cheer, a wall of Yes by Agathe Snow.

Photos by the author.

Read the original in French here.