This is an exhibition of photography we rarely see at the Victoria & Albert Museum in London, presented under the title ‘Shadow Catchers’ (until February 20th). What the five artists shown here have in common is their photographs, taken without a camera, without a viewfinder, without a lens. How is this possible? Three of them place objects directly on photography paper, thus obtaining images by photogram another does the same, but with light compositions that he recreates in a dark room. The last composes images by drawing directly onto photo paper with chemicals that react with the salts of the paper. All compose images that are more or less abstract, bathed in a surreal and poetic light, the antithesis of dominant documentary photography. It’s too bad that it is only in London where one can see such photographic research, and that it is so rare in France.

The first room is dedicated to photograms by German artist Floris Neusüss. Most are traces of bodies where, in a pagan, sensual performance, naked young women placed their bodies on the paper cut to their size: these are astonishingly precise imprints where flesh meets paper, infinitely more precise than Klein’s Anthropométries. Their positions, erotic or sweet, reflect a dynamism, a flight-like dancing motion suddenly captured, the seized shadow of a fairy. (Untitled (Körperfotogram), Berlin, 1962). These are dreamlike, subconscious images. Neusüs also shows a giant photogram of a window at Lacock Abbey taken by William Henry Fox Talbot (life size) photographed in 1835 and, on the groung, an amusing yet tragic composition, a shadow without a body, the antithesis of Peter Schlemihl.

The next room is, alternatively, the domain of alchemy: no more body, no more narrative but the cool beauty and abstract, geometric compositions by Belgian Pierre Cordier emerge in his chemigrams (Dedalogram V, 22/6/87). From random chemical manipulations emerge labyrinths, forests, diamonds, minimal and eternal forms. Photography is no longer a representation of the real world, instead mere writing with light, and the experimental photographer becomes the creator of material, of beauty and energy, rather than its mere registrar.

Passing from bodies to forms, we arrive at almost pure light itself. Equally remote from reality are the works by Englishman Garry Fabian Miller, who creates purely luminous images with various devices, colorful, reflective, or distorting, to achieve compositions where light and color burst. These images easily become vectors of meditation, mystical springboards, or energizing fuels. That which we see never existed, except in the dream of its creator (The Night cell, Winter, 2009/2010). 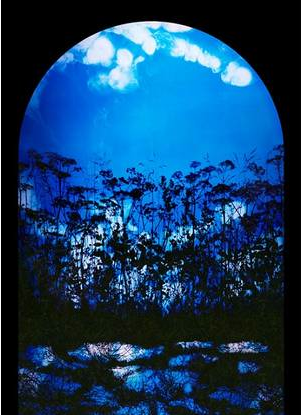 Susan Derges is closer to nature, and the English countryside; some of her photographs are of the night sky as it reflects on photosensitive paper spending the night at the bottom of a river, others are traces of waves or ice, captured in the same way, by direct contact with the object represented. Four large compositions, one for each season, are more complex: impressions of light from the sky captured through ink, aquatic weeds, reeds, and moss. They reconstitute a magic of nature, a return to the golden age. (Arch 4 Summer 2007/2008).

Finally, Adam Fuss, an Englishman living in New York, has some spectacular photograms, some with serpents whose thrashings through water are registered on photosensitive paper and this one, where a newborn, squirming a bit in a few inches of water, left a baptismal trace that touches the sublime, the metaphysical (top of the page, Invocation, 1992). His photographs are without a doubt the most tragic, those which interrogate us most about life, death, and perhaps the other side. This blue image of a butterfly in a photogram on a daguerreotype, reusing two techniques from the 19th century against the very rules of the daguerreotype; the opposition thus obtained between positive and negative, between image and mirror, between the empty blue and the fragile body of the insect, creates a sumptuous vanity (My Ghost series, 2001).

It is probably only by breaking all the rules of Good Photography, sidestepping all the controls of cameras and lenses, that one can hope to achieve these strange, stark photographs, so real by being so close to the object, and yet so ghostly.

This entry was posted in UK. Bookmark the permalink.