“Manet, inventor of the Modern” is the title of the exhibition that opened on Monday the 4th of April at the Musée d’Orsay (until the 3rd of July). Upon entering, the exhibition reinforces Manet’s modernity by inscribing him between Romanticism (Delacroix) and Realism (Courbet). In fact, the exhibition begins with a group portrait titled Hommage à Delacroix, by Fantin-Latour where Manet, upright and across from Whistler, on the other side of a portrait of Delacroix, is situated between the Realist Champfleury (standing for Courbet) and the Romantic Baudelaire. This group portrait (like all of Fantin-Latour’s portraits) is filled with meaning and nothing is left to chance: it’s this argument of modernised Romanticism that is finely developed within this exhibition. Moreover, the first rooms are dedicated to the influence that Thomas Couture had on Manet, who was his student for six years (there is a painting of a ‘Man seen from behind’ by Couture, a man draped in white, ghostly, surprisingly filled with modernity, in contrast with what one would expect from this relatively academic painter.)

The connections between Baudelaire and Manet that are detailed in the following section are like a missed appointment, whereby Baudelaire, whose desire it was to “convert Romanticism to Modernism” celebrates Constantin Guys (mentioned a bit too quickly here as a press illustrator), and not Manet, as the painter of modern life– and thus the first stroller, the ancestor of the ‘dérives’, the wanderings. Some drawings by Baudelaire and Constantin Guys can also be seen, such as Deux Femmes au Balcon (Two Women on the Balcony, 1845-1847; Musée des Arts Decoratifs, Paris).

A little further, the portrait of La Maîtresse de Baudelaire (Baudelaire’s Mistress, 1862; the Museum of Fine Art, Budapest) reveals an unattractive and square-faced Jeanne Duval, disappearing amidst the muslin waves of her crinoline dress from which a single, ugly foot emerges. Perhaps the relationship between Manet and Baudelaire would deserve a quasi-psychoanalytical study…The exhibition skims quickly over Manet’s psychology (I haven’t yet read the catalogue) but it is clear that this was a complex man in every respect- in his relationships with his father, with his mistress, (at the age of 18) and then  wife, Suzanne Leenhoff (but who was the real father of Léon-Édouard ?). It would also have been interesting to understand better how the successive refusals of his work by the official art-world and the scandals that accompanied, forged his point of difference, his marginality and his independence (like Courbet 12 years before, he constructed a pavilion to display his artwork outside the confines of the Universal Exhibition of 1867). 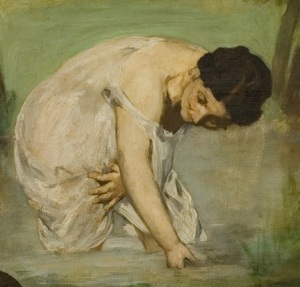 Subsequently, we admire closely and almost touch his scandalous paintings such as Déjeuner sur l’herbe, and Olympia. What more can be said that hasn’t already been said a million times, on this combination of contemporary mundaneness and ancient painting? It is best to simply let oneself be taken in by the quasi-magical atmosphere of these paintings and to avoid reciting what has been read or said about Manet elsewhere. My attention was then drawn onto Olympia’s diabolical black pussycat, so metaphorical (if I dare say so), and filled with symbolism (image above) and onto the forgotten character in the Déjeuner sur L’Herbe, the un-named one, the bather in the background, dressed in a greyish, loose, sleeveless dress, which she is curled up in (if one of the straps were to slip off, we would see her breasts), who, less indecent than her companion, is not looking straight at us. One could think thta her legs and her right hand have been amputated by the surface of the water. In order to avoid being shut in (and damned) by the provocative look of Victorine Meurent, our gaze glides easily towards the bather, to the most modest but not the most innocent element within this ‘foursome’ (seemingly the first title of the painting).

One of the most amazing rooms is titled ‘A suspect Catholicism’: suspect, because antipodean to Sulpician art, Manet introduced realist and crude elements in sacred art (like Caravage did in his time). Théophile Gautier (“This fat soft romantique ass,” wrote Jacques Henric), knew only how to chuckle about the Christ soutenu par les anges (Christ held by the Angels: 1864, Metropolitan Museum), that he “forgot to carry out his ablutions.” Yet this composition of a heavy man with an air of stupidity (and even hurt on the ‘wrong’ flank), and the two androgynous angels with soft faces (one stemming from Goya or Velazquez, the other ones from Fra Angelico) is  radically new in the domain of religious painting.

And his Moine en prière, (Praying Monk, 1864, Boston Fine Arts Museum) reveals Manet, inscribed with Hispanic roots, as a descendent of Zurbaran: the monk is also a man of flesh and bones, of skin and stubble, ; and not a pure, irreal holy spirit in a monk’s robe.

Le Fifre (the Fife) moves me because it was on the cover of the first book about art that I owned at the age of twelve. Les bulles de savon (The Bubbles of Soap) reminds me of Chardin, who I recently saw in Madrid: and in both, it was the gesture of the boy that counted, the truth of it, more so than the brilliant pictorial reproduction of iridescent bubbles. During the time when the Musée d’Orsay was still interested in contemporary creations, the troubling Balcon (Balcony) was presented as the counterpoint to a video by Anne Sauser-Hall but today, away with all that and back to order. Amongst Berthe Morisot’s portraits (his sister in law), one looks different, the Portrait de Berthe Morisot à la voilette (Portrait of Berthe Morisot in a Veil, 1872: Musée du Petit Palais, Geneva): it is, probably, only a sketch but the face of Berthe is devoured by the black lace of her veil, leaving her disfigured or, one could say, deconstructed. It was her who said: “Being painted by Manet is like eating a wild fruit, or one that is too green, and I like it.” (quoted from memory).

We can then skim quickly over the impressionist paintings, an art movement that Manet never really joined but flirted with, then wander among the numerous portrait paintings and finally reach the small room in the back, the one obviously less liked by the curator, the room of the still life paintings, titled Less is More? Perhaps indeed Manet’s modernity still respected the hierarchy of genres, perhaps indeed his still lives were mostly alimentary (in

both senses of the term), perhaps indeed Olympia is more important than “the first asparagus magnified by the artist,” but also, perhaps, this magnification of an object, this treatment of a little Citron (Lemon, 1880, Musée d’Orsay) as a motive by itself, as a ‘character’ inscribed in a tightened, dramatic yet simplistic composition, are demonstrating as much sense, imagination and mastery of composition as his ‘grand’ paintings.

Coming back to the hierarchy of genres towards the end of the exhibition, we are presented with historical paintings, from a moderately republican Manet, a far cry from the extremist ardour of a Courbet, but nevertheless close to the progressives, the French ‘radicals.’ After the election of Jules Grévy in 1879, who reinforced the still weak French republican institutions, Manet painted

republican scenes and streets decorated with flags. In 1881 (his last painting), he painted l’Evasion de Rochefort (the Evasion of RochefortI): Henri Rochefort, publicist, polemist and freemason, with ambiguous and constantly fluctuating allegiances (neither for nor against the Commune; he ended up anti-Dreyfussian and a partisan of General Boulanger), had escaped from a Caledonian prison by sea seven years prior, and had just returned to France. Of the two canvases shown at the exhibition, the Zurich one (shown here) is more dramatic, with its tormented sea, the frail skiff of the escapees and the silhouette of the English schooner who awaits them (believe it or not, her name was Peace, Comfort, Ease). It’s ‘Medusa’s Raft’ inversed, men victimised by power and not by elements, a helping solidarity and not a tragedy, a less grandiose but as dramatic treatment- realist romanticism in sum.

Just beforehand, we passed before l’Exécution de Maximilien, not the ‘clear line’ versions of the National Gallery of London, or of the Kunsthalle in Manheim, that everybody remembers, but a blurry, smoky, and indiscernible version (1867; Boston Fine Arts Museum) where those shot have disappeared in a cloud, where the face of the non-commissioned officer in charge of giving the coup de grace, facing us, remains indistinct, where the whole scene floats in a haze: a history painting in-between, a large genre painting which hides behind effects of form, of line and of light, here again at the antipodes of the usual history painting.

We of course regret that the Bar des Folies Bergères was not loaned by the Courtauld Institute, neither the Déjeuner the Munich Pinacotech. The pleasure would have been greater, but this exhibition remains very complete, well constructed, and it reaches rather well its goal of showing how Manet’s modernity is also anchored in Romanticism, reactivating and revisiting it. Shortly, another entry on a secondary subject, but one that interested me a lot in this visit: the photographic aesthetic of Manet.

Photos courtesy of the Musée d’Orsay, except for the drawing of C. Guys, and from Manet, le Citron and Berthe Morisot à la voilette. Many thanks to the Musée d’Orsay for permitting me to visit the exhibition before its opening.

One response to “Manet: modernised romanticism?”