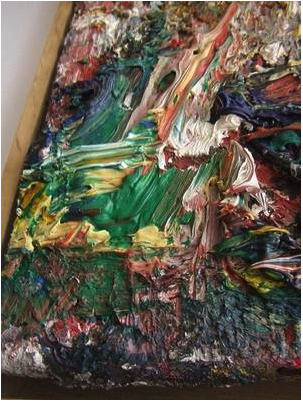 There is a beautiful Eugene Leroy retrospective in the 18th century hall of the Musée Tourcoing, renamed ‘Eugene Leroy’ to mark the painter’s centenary. Leroy once said “I didn’t want to make a pretty canvas, I only wanted to make paintings”: these canvases, which weigh as much as 200 pounds, overflow with pictorial matter forming masses, waves, constantly overlapping with, under the carapace of the surface, paint that still seems soft and moving, at times leaving other buried colors to reappear, dissolving others, giving way to other valleys, to other clusters accrued over time. Leroy reworked his paintings incessantly, never satisfied—a veritable living painting.

The viewer is initially pulled in by a long blue wall showing eighteen large canvases, from 1960 to 1998, and one follows it in procession, like the Stations of the Cross. The largeness of the room helps the viewer view the works at a distance, to discern, sometimes screwing up his eyes, the contours of a face or body, before getting closer to register the complexity of his painting. There is no correct distance, no appropriate vision, there is only the experience of navigating the room at the mercy of ones feelings facing such a wall. Will we get burned if we get too close?

In this dark self-portrait from 1960,

his face seems to emerge from the depths of the background, but this background itself is a landscape; I thought of Véronique, of the face of Christ emerging from tissue.

In the series of the Seasons (Season 4, a detail of which is shown above), it is, strangely, in the viewfinder of my camera that the motif appears most clearly, and with distance, more revealing. Whatever the subject, it seems, whether a nude, a head, or a landscape, it only serves to reveal the painting, or the reason or story, of painting itself. 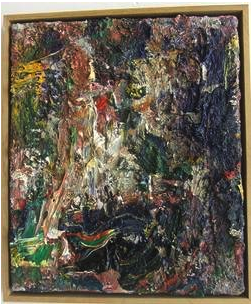 There is in his paintings a hidden presence, at first invisible to the naked eye, which only reveals itself after long contemplation. I felt a strong religion dimension; I do not know if others have made this analysis or if Leroy himself intended the connection, but I am struck by the importance of religion in his life:  raised by his uncle and tutor, an abbot, at one point considering becoming a monk, he entered a religious school where, at age 15, his teacher, Father Cau, encouraged him to draw. He made a pilgrimage to Rome at age 19, and was a teacher all his life in religious schools in Holland and in the North. Leroy was clearly steeped in traditional Catholicism. His first show in Paris, in 1943 at Else Clausen Gallery, was filled with religious tableaus;

beholding a certain icon at the Tretiakov Gallery in Moscow in 1974 was a revelation that influenced the rest of his painting. His closest friend was a poet and priest, Maxime Deswarte. These are but a few clues, surely important to understanding the man, but perhaps not determinant in regards to his painting. But I think, or suspect, that the sense of imminence, of mystery, of revelation that abounds in his work, can be linked to this religious worldview, to this belief. Leroy once said, “To acquire one of my works is an act of faith.” Perhaps it is already an act of faith to look at his Christ from 1958.

Photos by the author. Eugène Leroy is represented by l’ADAGP, and thus reproductions of his work will be removed from this site at the end of this exhibition. Trip paid for by the Musée de Tourcoing.